Iris by the River’s Edge. Carp Leaping Up a Waterfall. 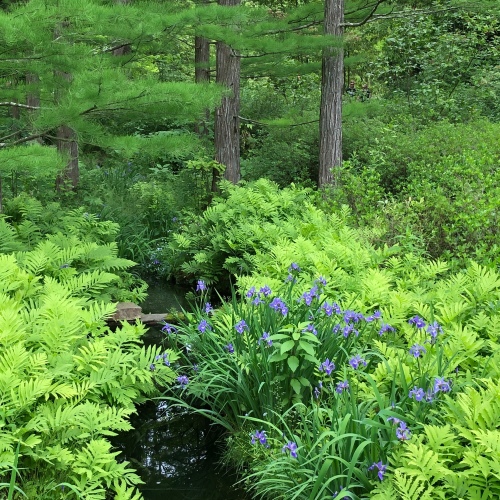 With the beginning of May, the heat of Summer seems to be growing day by day. As the glories of Spring have come and gone, blossoms are replaced by the deep greens of the forest and the occasional burst of color as flowers bloom by the river’s edge. The soft murmur of a creek or stream blends with the wind pushing through the trees, bringing a sense of coolness to the mind, even when temperatures are on the rise.

In Japan, early May is marked with the events of Golden Week (黄金週間 Ōgon Shūkan), reaching its climax on the fifth, with 菖蒲の節句 Shōbu no sekku, Iris festival. Also known as 重五 Chōgo (“Double Five”), 端午の節句 Tango no sekku (“Beginning of the Horse Month”), and こどもの日 Kodomo no Hi (“Children’s Day”), May 5th is packed with meaning, both in the profane world and in the nebulous world of nature and the supernatural.

Just as Summer begins to appear, people in ancient times would take measures to fortify themselves agains the heat, which also brought about plague, famine and the premature death of young children. In ancient China, sweet-flag (Acorus calamus), as well as mugwort, was hung under the waves of homes to purge evil spirits and avert fires. Similarly, in China, the fifth day of the fifth month is marked with the observation of 端午節 Duānwǔ jié, where it was believed that an offering of rice wrapped in reed or bamboo leaves to the river dragon would avert dangers that came with the arrival of the rainy season.

In Japan, the water iris (Iris ensata var. ensata) bloom during this period, which spring up like violet-colored arrow points. Their likeness to this article of martial spirit joins the often warrior-infused ethos that surrounds the precursor of Children’s Day, Boy’s Day. Imagery of arrows, samurai armor, and the refined warrior, thus often are abundant in Japan during this time.

As one’s eyes go from the river’s edge to the sky, fluttering multicolored carp-shaped banners can be seen, representing family members in a household. These, too, trace their origin to the dragons of ancient China, as it was believed that dragons originated from carp that swam up waterfalls. The notion of this determined fish to overcome great difficulties and become something greater, more noble than itself, is analogous to a child growing, studying, and cultivating the skills to become an adult, to beat all odds, to awaken to their true self.

As I sit for tea on this May 5th, I cannot help but to engage with this swirl of energies around me. Summer’s heat is finally here and I’ve begun to use the 風炉 furo to heat my 茶釜 chagama. So, too, have I begun to use lighter, wider teabowls. For today’s sitting in observance of Shōbu no sekku, I use a modest 井戸茶碗 Ido chawan, which has subtle hues of grey and purple.

For a tea container, I employ a small antique lacquered 小棗 ko–natsume, upon which is the playful design of 壺 tsubo in a warm gold.

As the kettle comes to a soft, roiling boil, I cleanse the small natsume. After running the 袱紗 fukusa over its glossy surface, I lift the lid, revealing a mound of bright green tea powder.

Placing this to the side, I begin to remove the other items, one by one, to cleanse and prepare for making a bowl of 薄茶 usucha.

The 茶杓 chashaku, as straight as an iris, is cleansed and placed atop the natsume. The skin of the bamboo conveys a murky landscape, akin the mists and clouds that surround a waterfall as it pours and torrents through a canyon.

The 茶筅 chasen is lifted and set beside the natsume. 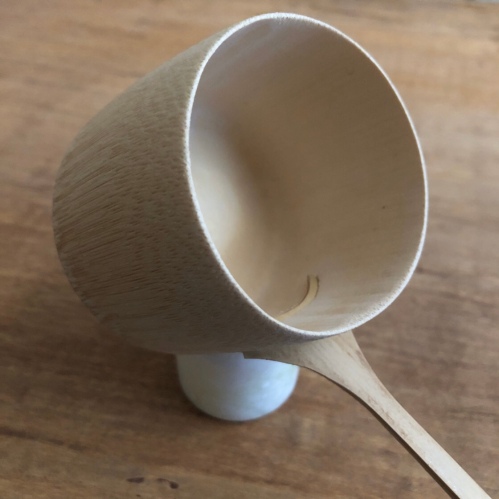 The 柄杓 hishaku is lifted and held in the left hand.

From where it had rested, a 蓋置 futaoki made from a jade archer’s thumb ring, once a symbol of the military elite of 清 Qīng and, later, of scholars. 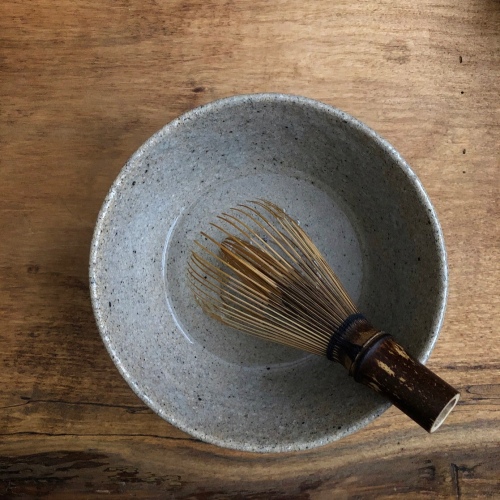 Water is drawn from the kettle and poured into the bowl. The chasen is dipped and whisked and returned to sit beside the natsume once again.

The bowl stands alone, slick with moisture, clean and fresh and refreshing to view. Small gusts of wind push through a space underneath the window of my tearoom and the coming heat of the day is assuaged for a moment.

Once all three have been placed in the center of the bowl, I mark the small heap with the sigil of my school and lightly tap the chashaku along the inner rim of the teabowl, removing any excess tea dust from the scoop. A soft ringing sound rises like a small bell.

I place the chashaku back atop the natsume, its tip coated in tea. Cool water is added from the 水指 mizusashi into the chagama and the sound of boiling ceases. The tiny world of my tearoom is silent and still. My mind focuses as I bring the ladle down towards the teabowl. A small gust of wind. A splash of water. The rhythmic motion and sounds of whisking tea.

I draw the chasen out from the bowl. A small peak of foam rises in the center of the chawan. A tiny mountain for the mind to climb. I lift the bowl before me. A solitary offering as I take a moment for myself to pause between work and life and the ongoing challenges of the world. The mind flutters like a flag in the wind. Like a carp leaping up a waterfall. Caught in these actions all day, we often don’t take moments like this to just return to simply sitting. Simply doing. Simply being.

As children, perhaps we unlearned this quality of life. For what? To become a warrior like mom and dad? A scholar, resting their head upon a stack of books? A poet, forced from their home into exile? The carp jumps out of the water. The iris springs from the river’s edge. Dragons are born and people awaken.

The bowl of tea vanishes as quickly as it was made. All that is left are the frothy dregs.

I turn the bowl in my hands and inspect its every imperfection. The bubbling glaze on its foot reminding me of who I am.

I cleanse the bowl, the chasen, and the chashaku once more.

I decide on a whim to enjoy a final 拝見 haiken by myself. The natsume is placed beside the chashaku on a tray of mulberry wood. Set against the swirling of the wooden grain, I lose myself in the little objects and the moment they helped to make possible.

A painting of tsubo playfully dance and roll across the lid of the tea container.

I open the lid to see the remnants of the tea inside. A concave carved-out represents this one meeting of myself with myself.

The chashaku, with its mountains and canyons, mists and waterfalls all made by some moisture that had once accumulated against the skin of a bamboo stalk now become the journey I have taken.

Leaping and fluttering, flapping and climbing.

My eyes glance over to the alcove. A scholar’s carp-shaped water-dropper sits in the 床間 tokonoma. This carp, too, will become a dragon.

4 responses to “Iris by the River’s Edge. Carp Leaping Up a Waterfall.”