The Rich Flavor of Friendship

Every once in a while I escape New York City, replacing the clamor of the urban jungle for the somewhat more relaxed climes of San Francisco. Being born and having lived in this West Coast city, I find myself feeling instantly at home amidst the hills, the fog, and the “single season” that never seems to shift. Likewise, whenever I return, I find myself reconnecting with old friends and, sometimes, making new ones.

What now seems like a second tea space for me, I often find myself welcomed into the sunlit tearoom of Chris Kornblatt, fellow tea person and purveyor of fine tea.

Unbeknownst to me, that day Chris has also secretly invited our shared friend and my mentor of over a decade! Seeing him again after many so years was truly sublime, a delightful opening to a day filled with tea. 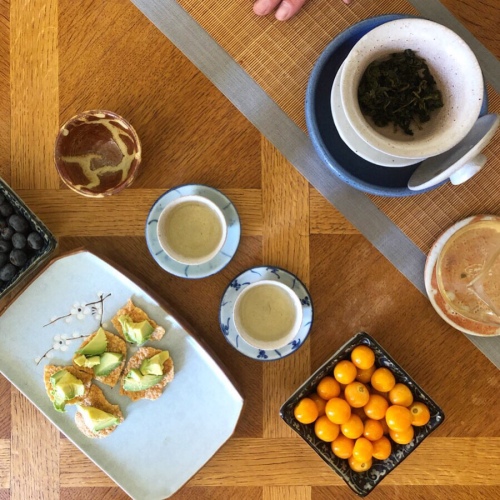 Memories soon began to pour out as freely as tea did into many small cups. A bounty of locally-procured food was present to stave-off hunger. The sweet scent of a high mountain Taiwanese oolong brought by my mentor began our session.

Steeping after steeping marked by the moving of small glassy and metallic beads along a woven thread. New teas emerged in time as the energy of the room became more lively.

An aged and roasted 鐵觀音 Tiěguānyīn (“Iron Bodhisattva of Mercy”). The leaves, twisted and curled, darkened by the slow, calculated roasting overseen by a tea master in Anxi county, Fujian province. The color of the tea, dark and coppery. The flavor, smooth, velvety, with a medicinal finish. As time continued, more tea emerged.

A “mystery” oolong, which, after close inspection and several rounds of brewing, was determined to be an aged 金玫瑰 Jīn méiguī (lit. “Golden Rose”) from Wuyishan in Fujian province. Its flavor was shifting, a unique blend of apricot and barley, soybean and zucchini.

Finally, my mentor produced a final treasure from his pocket, a rare and aged brick of 熟普洱茶 shú pǔ’ěr chá (“cooked puer”).

Like a beautiful day, it opened softly, brightening as it warmed, and ending into a deep, relaxed, inky darkness. Friends sharing tea, sharing stories, sharing time together as if the years apart did not exist.

I wanted to thank you all for reading (and commenting on) my blog. Seven years and 100 posts (yes, this is the 100th post!)! I wanted to bring it all back to where it began: in San Francisco, surrounded by friends, delicious tea, and dreams of a greater and more connected future.

In the over twenty years of making tea, almost two decades of practicing 功夫茶 gōng fū chá everyday, fifteen years of practicing 茶の湯 chanoyu, I’ve only wanted to make tea and share tea. You’ve allowed me to share my most private moments and offer tea to you all. In the end, the tea tastes better. The memories last longer. The world we live in gets a little smaller.

Looking forward to sharing more tea and time with you as time goes on. I hope we can enjoy each moment together!

Brewing pu-erh in a relaxed style 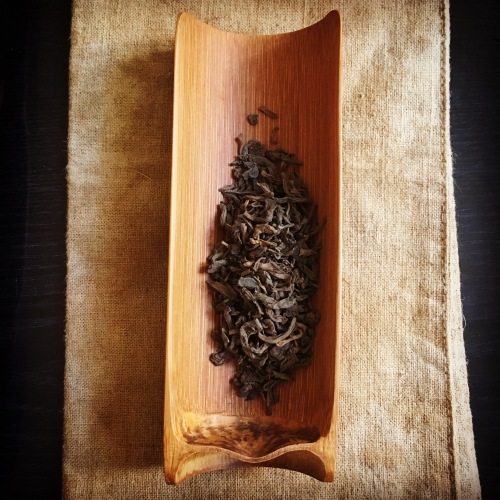 (IMAGE: The leathery leaves of a late 90s shou pu-erh, ready to be brewed in a relaxed style on a late summer’s day.)

As the last hot days of summer begin to shed themselves, the heat gives way to light breezes. In classical Japanese, the saying 天地始粛 (“てんちはじめてさむし”,”tenchi hajimete samushi”), literally “Earth and Sky begin to cool”, was often invoked to describe this natural phenomenon and is often met with a sense of relief. During these days, as the summer heat wanes, my tea brewing sessions tend to become more relaxed. No more is this more evident than in my approach to brewing pu-erh.

Brewing pu-erh (for most folks I’ve met in my travels) tends to be a pretty relaxed practice. Pu-erh is one of the most commonly consumed teas within China and has even become popular in Korea and, more recently, in the United States. In China, this is the tea that I will see people casually drink, paring it either with a meal (the whole act of eating dim sum in Guangdong evolved around drinking this type of tea, the meal is referred to as “yum cha” or “drink tea” in Cantonese), conversation, or just hanging out. As a result, the way I find most people drinking pu-erh tends to be quite laid back.

Today I find myself brewing a pot of pu-erh in this casual manner. For this, I’ve selected a basic “house pu-erh” that I had helped to bring in from China years ago. It is a very straight-forward medium-sized leaf shou pu-erh, picked and processed in the late 90s. The color of the dry leaves are typical of this type of tea: dark and leathery with bright orange-tan tea buds here and there, as well as the occasional stem (which helps to lend a sweet, “woody” flavor to the tea). Given its age, the tea should be very smooth.

I’ve paired the tea with a “Pearl of China” teapot, a classic shape for a yixing teapot. The spherical shape is perfect for this type of tea, allow the leaves to spin freely within the pot. Once the leaves settle, they should have enough room to open up.

The key to brewing pu-erh in a relaxed manner is to keep it simple: I will use just one kettle, one teapot, and one cup. Nothing else. The kettle will come to a boil and I will brew the tea. I will not be concerned with the time it takes to brew the tea nor the temperature it is brewed at. The teapot, which has relatively thick walls, will keep the tea at a pretty even temperature. The first steeping will be short, as long as it takes for water to evaporate off of the teapot, after which I will pour only a fraction out into my teacup. The remaining tea in the teapot will remain until I top-off the teapot for a second cup. As I continue to brew, the water from the kettle will naturally become cooler and, as such, I may lengthen the time of subsequent steepings.

The result of brewing in this fashion produces a liqueur that varies in intensity. The first steeping will tend to be quite light, expressing the woody notes of the tea. As the tea continues to brew, the flavors will deepen and the dark berry, earth, and loam notes will emerge. By the fifth or sixth steeping, this tea becomes quite dark, almost as dark as ink or black coffee. In some way, there is even a heartiness to this tea that surpasses coffee, both in its complexity and punch it delivers. By the twelfth steeping, the pu-erh begins to sweeten and brighten in color, shifting from a dark ebony to a light rose. The remaining flavors are almost sugary, akin to a yellow tea.

(IMAGE: The first steeping of many of a late 90s shou pu-erh. The color of the liqueur is considerably lighter than subsequent steepings, offering notes of dry wood and fruit.)

On a late summer’s day, brewing tea in this manner just seems natural. As always, I am curious how you brew your pu-erh. Is it closely tended to? Or, is it like how I have done so today, casually steeped and enjoyed with the passing of one season into the next?

The “Gongfu” of Thermos Tea 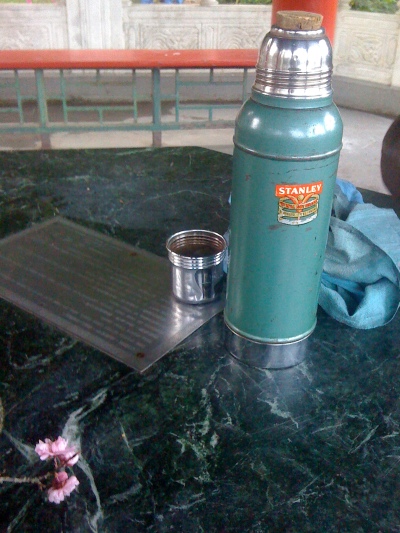 For about a month now, I’ve been planning on writing a “how to” for brewing Gongfu Cha in the traditional method, using a Yixing teapot. I promise that this will happen, and SOON! For now, however, I feel inclined to discuss how most of China brews it’s tea… In a thermos! END_OF_DOCUMENT_TOKEN_TO_BE_REPLACED